Surfing in Los Cabos is a unique experience, it is a surfing paradise situated between the Pacific Ocean and the Sea of Cortez. El Encanto Villa Rentals is located in the perfect spot, just a short drive from the best surf breaks on the Sea of Cortez.

Surfing in Cabo offers diversity in location, break direction, level of difficulty and some of the greatest coastal scenery you’re likely to experience anywhere in the world. There are dozens of beautiful uncrowned surf spots to choose from.

LOS CABOS OPEN OF SURF from Boardwalk Productions on Vimeo.

The southeast-facing Costa Azul area is located just southwest of San Jose Del Cabo, right on the tip of the peninsula. This area is known for its reasonably consistent rock reef breaks such as Zippers and the rock as well as Old Mans. There are some nice waves in this area but be prepared to deal with crowds at The Rock or Old Mans.

The west facing Pacific Coast, northwest of Cabo San Lucas, which is known best for its dependable beach and rock-reef breaks. Cerritos Beach is a fun and happening beach on the weekends with a bar/restaurant, music, and many people playing along with the shore. This fun and picturesque location is a worthwhile day trip. The surf can be really good especially on the west and north-west swells and breaks over a sandy bottom. San Pedrito, also known as Pescadero, is a fun right-hand point break that breaks over a rock reef and is best on west and northwest swells during the months of November through March. 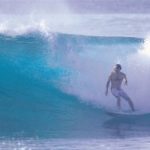 Off the beaten path and best accessed by 4 wheel drive vehicles, Shipwrecks is one of the famous breaks that is usually un-crowded. The drive into this area boasts some of the most amazing coastal scenery you’re likely to ever see. You’ll need to keep a sharp eye out for a small development named Rancho Rocas del Mar, the first break is just south. Shipwrecks is most productive during a strong southerly swell. Further north are Nine Palms, Punta Perfecta and Los Frailes.

This is a sandbar break that can get good especially after storms have built up the sandbar. Left and right breaks that can build to double overhead but watch out for a mean shore break at low tide.

You will find this spot In the middle of the Cabo Tourist Corridor adjacent to Chileno Bay. This is a strong break that goes both ways with speed and is best left to the expert surfer. 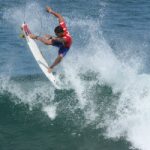 World famous Zippers is the closest break to San Jose del Cabo.
Located just west of the town, it offers up a fun, fast right break and is the site of numerous surf competitions. With fame comes crowds and if you are hoping to find a wide open ocean, chances are you won’t. If you can handle fighting for position you will be rewarded with a nice long ride as the reef structure creates a long break when the size is there. 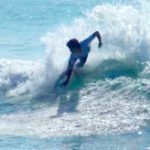 Another good spot along the Costa Azul shore.This is also a right break,which forms off a rock outcropping. On a good day, the ride is a bit over one hundred yards. Light swells produce 3-4 footers but the occassional push from tropical storms can push it to 6-10 feet in the right swell.

On the way from San Jose del Cabo to Cabo San Lucas, this is a right breaking swell that offers good surfing for beginners as well as advanced surfers.

Surfing in Los Cabos is great year round. May to October are the best months on the Sea of Cortez side, with swells from the Southern hemisphere. November to April are the months best for the Pacific side. Surf areas are easily accessed by dirt roads running from the main highway.

The Summer months of June through August bring storms with their winds pushing swells. With them comes some great surfing, but the downfall is that’s when the waves are the most crowded. The Fall months of September to November is really the time to be here to avoid crowds but still manage to catch good waves.

September-November can be the best time to visit Southern Baja. South swells are still reasonably common, bringing slightly infrequent surf to the East Cape and Costa Azul, and west swells have started in earnest, causing pretty consistent surf on the Pacific coast. Water temps are starting to cool down, but are still way warmer than Southern California.

The East Cape is pretty much flat. Costa Azul isn’t much better, but the Pacific Coast spots that are exposed to west swell can light up for days on end, with super clean conditions.

March-May, like anywhere in the Northern Hemisphere, is a transition time. May is actually the most consistent month for south swells, so it could be a good transition. Winds can be bad during this time, though, as the howling springtime northwesterlies on the Pacific side blow right into the northeasterlies on the East Cape. But the swells are reasonably frequent so springtime is actually a good time to plan a visit. El Encanto Villas in Cabo offers condos and villas. Check out our different properties.

We have made a selection of the closest break points from El Encanto Villas. You can locate the spots in the map below, and read more about them.El Encanto Villas is located between Bocana and Punta Gorda surf breaks. Make your surf trip to Caboand stay at El Encanto Villas with us. We will be happy to help you book surf boards, paddle boards, and even book you lessons if you are a beginner.